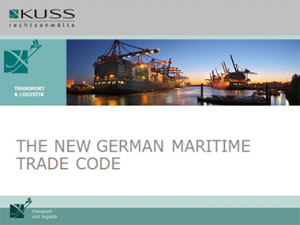 On the occasion of the 2013 FALL MEETING OF THE MLA AND 18TH CONGRESS OF THE II M in Puerto Rico, on Oct. 30th 2013, Robert Kuss has spoken before the Carriage of Goods and Marine Insurance Committees about “The new German maritime trade code”.

Welcome our new apprentice: Charleen Kurpanik is joining us from Berlin. She will complete her training as a legal assistant in our firm.

July 13th 2013
An atmospheric summer evening at KUSS Rechtsanwälte: “Die Kölner Lichter” (Fireworks) are held each year directly in front of our offices located at  Konrad-Adenauer-Ufer.   A stunning backdrop for a get-together with our  clients, colleagues and friends!

April 2013
The new Maritime Law has been brought into force. The  previously applicable maritime law which goes back to  the ADHGB of 1861, has been restructured, condensed and modernized. Legal institutions such as the shipping partnership and  ship’s protest proceedings were abolished and nautical fault and fire as liability exclusion have been removed from the law. Instead, the opportunity was created, to add the latter through terms and conditions again to the contract. Bareboat and time charter are now regulated by law. The legislature has included the executive carrier into the maritime law. The possibility of the ship’s arrest was agreed to dramatically. In addition, the law which introduced the maritime law led to some important changes in the general transport law. Whether the reformation of maritime law will lead to a substantial change in the legal practice remains to be seen.

We happily advise and train your staff regarding this new law. Contact us!

The Currency Converter is powered by Investing.com